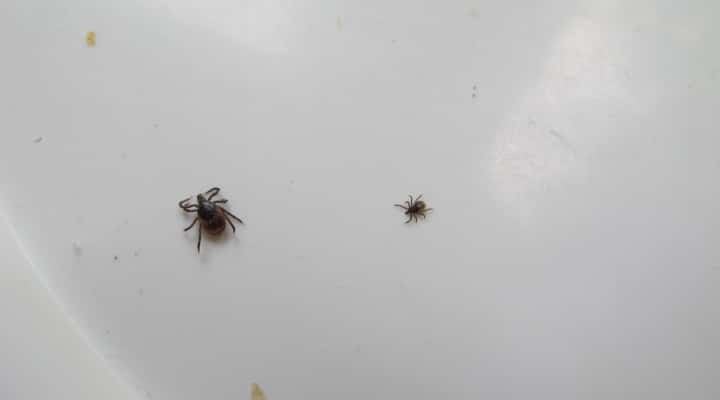 Ticks are a nuisance to many, but they can pose a threat to farmers whose livestock are at risk for disease spread by the pests. (photo by R. Kriatyrr Brosvik, creative commons/flickr.com)

RICHMOND, Va. — Ticks are a nuisance to many, but they can pose a threat to farmers whose livestock are at risk for disease spread by the pests.

Most active in warm weather, ticks typically are prevalent in early spring through the summer and fall. Some can even be spotted in the winter if it’s mild enough.

One such pest in Virginia is the Asian longhorned tick. First identified in the state in 2018, it transmits the disease Theileria orientalis, which can have a devastating effect on vulnerable livestock such as young animals. Symptoms include lethargy, fever, weakness, and anemia.

The disease can lead to lowered milk production, stillbirths and increased death loss in herds.

“If cattle or other animals become infected with Theileria orientalis, they can recover,” said Tony Banks, senior assistant director of agriculture, development and innovation for Virginia Farm Bureau Federation. “However, animals under stress such as pregnant or post-partum cows can incur significant ailments and in some cases death. Mode of transport is the tick, so the disease is not contagious from cow to cow.”

The disease also can be spread through shared needles during livestock injections.

In addition to the Asian longhorned tick, Virginia is home to other ticks such as the deer tick, which transmits Lyme disease.

In addition to disease, ticks can cause skin damage, irritation and infections leading to increased stress, lower productivity and overall poor animal health. Stafford said farmers should remain vigilant to protect their herds.

“As with homeowners who have tick problems, we recommend they modify habitat likely to harbor ticks,” Stafford said. “It can be hard for farms to apply this approach considering the big acreages they manage, but keeping cattle out of the brush could be helpful. Fencing them away from some likely habitat could help keep them away from a potential source of trouble.”

Keeping grass and weeds trimmed, discouraging wildlife, applying treatments to animals for ticks and using other control methods are some ways to prevent the pests.

Farmers should report suspicious animal or herd symptoms to a veterinarian.

“Keep this in perspective—the most probable cause of death in cattle is respiratory disease,” Stafford added. “Theileria is expected to add a small percentage to existing death loss in cattle.”

There are no upcoming events at this time.