The Adorable World Of Alpaca Farming In Virginia 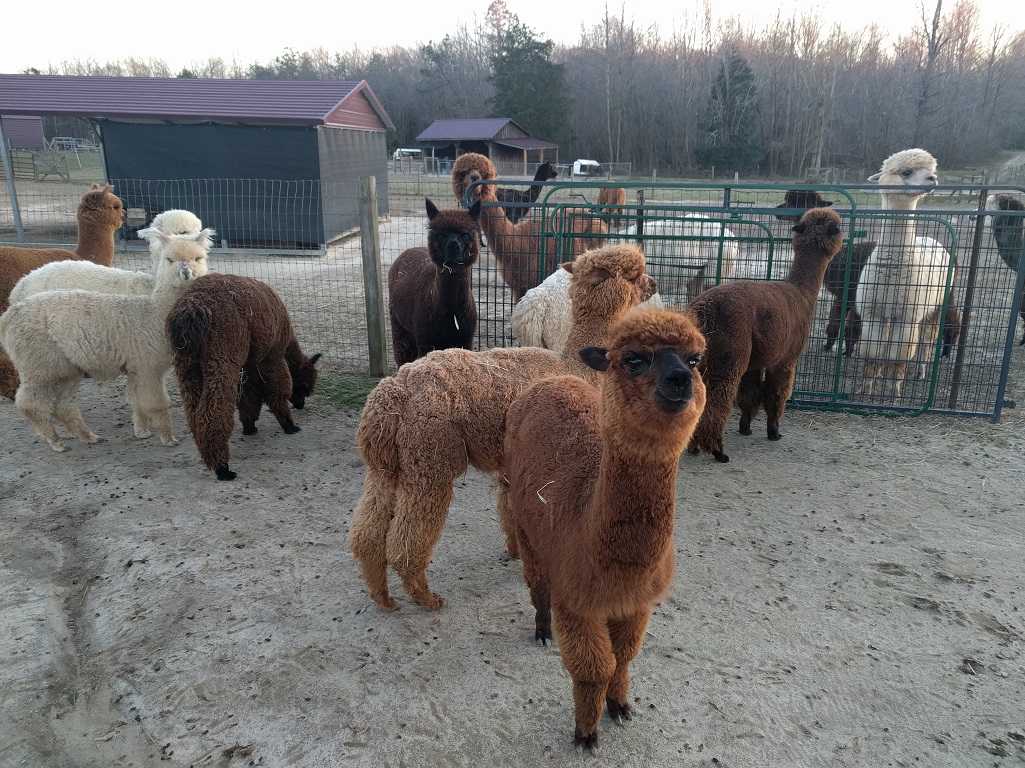 Local alpaca farms face their share of struggles, that’s for sure… but being constantly surrounded by cuteness helps make up for it.

Dust kicks up on the little dirt road to Clearview Alpaca Farm. At first, there’s just an empty field, monochrome and cut low for winter. At the foot of a cluster of trees, a weathered metal alpaca cutout comes into view, letting you know you’re in the right place.

But then you turn the corner, and there they are. Black, brown, white, mixed and matched: more than 200 alpacas wandering through a cluster of gated enclosures and shelters. Some are shy, almost bashful; others walk right up. There are babies wearing polyester coats around their torsos and keeping close to their mothers.

“Even though they move as a herd and they act like a herd, they are all individuals,” said Farm Manager Jen Perry. “And they all have different personalities.”

About five months ago, Perry quit her job and moved from North Carolina on an offer to manage the farm for owner Donna Higgason. Through the end of summer, a warmer-than-usual fall, and an abruptly cold winter, Perry learned the name of every animal, and mapped their personalities.

“Because they are prey animals, they hide any kind of ailment really, really well,” said Perry. “They will not show weakness, so you don’t see it until they are truly sick.”

Perry knows each animal so personally, she can spot when “somebody’s just a little bit off today.” She identifies small offbeat tics which could be evidence of a larger problem, and armed with a Biology degree, learning seminars with Higgason, and years of experience with her own alpacas, she gives them the medical help they need.

Not all city dwellers are aware, but alpaca farms dot the Virginia landscape. In fact, they can be found in every U.S. state, including Hawaii and Alaska, according to Perry. And while alpacas are packed into the same mental compartment as llamas for many people, there are many interesting things to learn about these creatures.

What’s more, the way alpacas are classified might be about to change. A brutal attack last year prompted a Virginia House Delegate to introduce a bill which would drastically change the way these animals are viewed in the eyes of the law.

Alpacas were first imported to the United States in 1984 from the craggy mountains of Bolivia, Chile and Peru.

“Alpacas were considered royal property, and even if you go down there [Peru] today, you can’t just walk on an alpaca property, you have to get permission,” said Wendy Hermes, owner of Hermes Alpacas, just 20 minutes from Richmond.

Hermes recently sold the last of her alpacas after more than a decade of relying on them as her livelihood. But before she sold them, once a year, every year, she would harvest their fleece and process it into yarn. From there it showed up on online stores or in the windows of boutiques, as gloves, hats, sweaters, throw blankets… you name it.

“Alpacas have more colors of fleece than any fleece-bearing animal in the world,” Hermes said. They sport 22 colors, to be exact, and according to Hermes, their fiber is unlike wool in that it is hypoallergenic and doesn’t need to be treated with incredibly hot water or harsh chemicals.

Furthermore, alpaca fleece is often claimed as much warmer than wool, and according to Perry, has smaller average microns, making it softer on the bare skin.

To make it even better, alpaca fiber is naturally water-repellent

“These guys can stand out in the rain, and they can dry in the sun in just a few hours,” Perry said.

Perry even cited a recent study claiming alpaca fleece as fire-retardant. But there is more to alpaca than just their fiber.

“Every part of the animal is useable,” Hermes said, referring especially to their poop. “Their poop is fabulous, because it doesn’t have the harmful nitrogens in it that the horses have, or cow.”

Because of this, you can use it as fertilizer immediately, without letting it age, and there is no risk of harming the crop.

“I have a guy that comes every year and gets like 4-5 truckloads of poop,” she said.

The alpaca population has seen many changes across the country. South American alpaca imports were closed in the mid 90s, according to Perry. With an approximate lifespan of 20 years, alpacas in the states are increasingly U.S. alpacas.

For another thing, their value has been steadily falling over the years, from tens of thousands of dollars for prized specimens when Hermes began farming to just a few thousand now — though there are always exceptions. Hermes said this isn’t necessarily a problem, just the market correcting itself. A year’s yield of alpaca fiber could never pay off the upfront cost of the animal back then, she said.

“So then it was all based on bloodlines, and people would go to auctions,” Hermes said.

It’s a given, markets are in flux. But another potential change is making its way through the General Assembly. One that’s both legal and social.

“You can hear her screaming. He’s pulled her down now and she’s in the mud right by this little pond here and you can hear her just screaming for help,” Michael Hipple told Wavy News 10.

However, the charges brought against the owner of the dogs were dropped, because alpacas are not legally considered livestock.

According to Perry, wild and domestic dogs are the greatest threat to the area’s alpacas, and Hermes said she would often speak to her neighbors about keeping their dogs under control.

Hermes said she thinks a herd of cattle or other traditional farm animals are viewed much more seriously under the current law, and recourse is limited for alpaca farmers.

“This is my livelihood,” said Hermes emphasising every syllable, “It’s like going into your job and taking something away from your job.”

This session at Capitol Square, Del. Brenda Pogge introduced HB2689, which would classify alpacas and other animals in the genus Vicugna as livestock. The bill passed the House unanimously, and is currently making its way through the Senate.

Meanwhile, back on the farm…

Standing in the medical building layered with shelves of supplies, Perry pointed to and explained some of her different medical duties, stressing that the items weren’t alpaca-specific, and any livestock farmer would be familiar with the same equipment.

“All of the drugs that we use are the same drugs that are used on horses and goats and all other livestock,” she said. “There are no specific alpaca drugs.”

There aren’t any specific alpaca vets either. Alpacas are undeniably cute, and they are relatively new to this country, but they are quickly becoming conventional, and they are many farmers’ way of life.

“I don’t go to PetSmart for my feed, I go to Tractor Supply just like anybody else,” Perry said. “A chicken farmer or a goat farmer, yeah, we’re in the same corner.”

While HB2689 seems uncontroversial, the Commonwealth and its alpaca farmers will have to wait and see. But in the meantime, things certainly aren’t slowing down for Perry.

“Every day is different,” Perry said, smiling. “I can have any kind of plan in mind that I want to have, and it’s just… it goes to chaos. And it’s a great chaos.”

On one of the coldest day of winter, Perry said she remembers rushing a newborn alpaca to shelter. Mother alpacas don’t lick their babies, so it’s up to Perry, when the climate is harsh, to make sure the baby is warm and dry, which involves quick action, hair dryers, and lots of towels.

For Hermes, one evening from her days of alpaca farming sticks out in particular. She had nine babies all about the same age, and she watched them huddle together when their mothers were preoccupied with eating.

“And you could almost see one was saying: ‘Well, you want to get in trouble?’”

She said they started running chasing after each other and honking until “they had a line going.”

“And they were running all around the field and everything, and then all of a sudden, somewhere, someone behind the leader would break and take off like a bat out of hell.”

She said they ran in all directions, but inevitably formed the line again and again, “maybe with a different leader.” Finally, the leader of the line wasn’t looking where he was going and crashed the whole group into one of the mothers.

Hermes said everybody was laughing at the shenanigans; it was like the kids were misbehaving.

Ultimately, after years working at the trade, Hermes’ advice to alpaca farmers is applicable to any field.

“Find something it is about these animals that you really, really like, and then do that, and do that well.”

All in person workshops around the state have been postponed until the further notice.